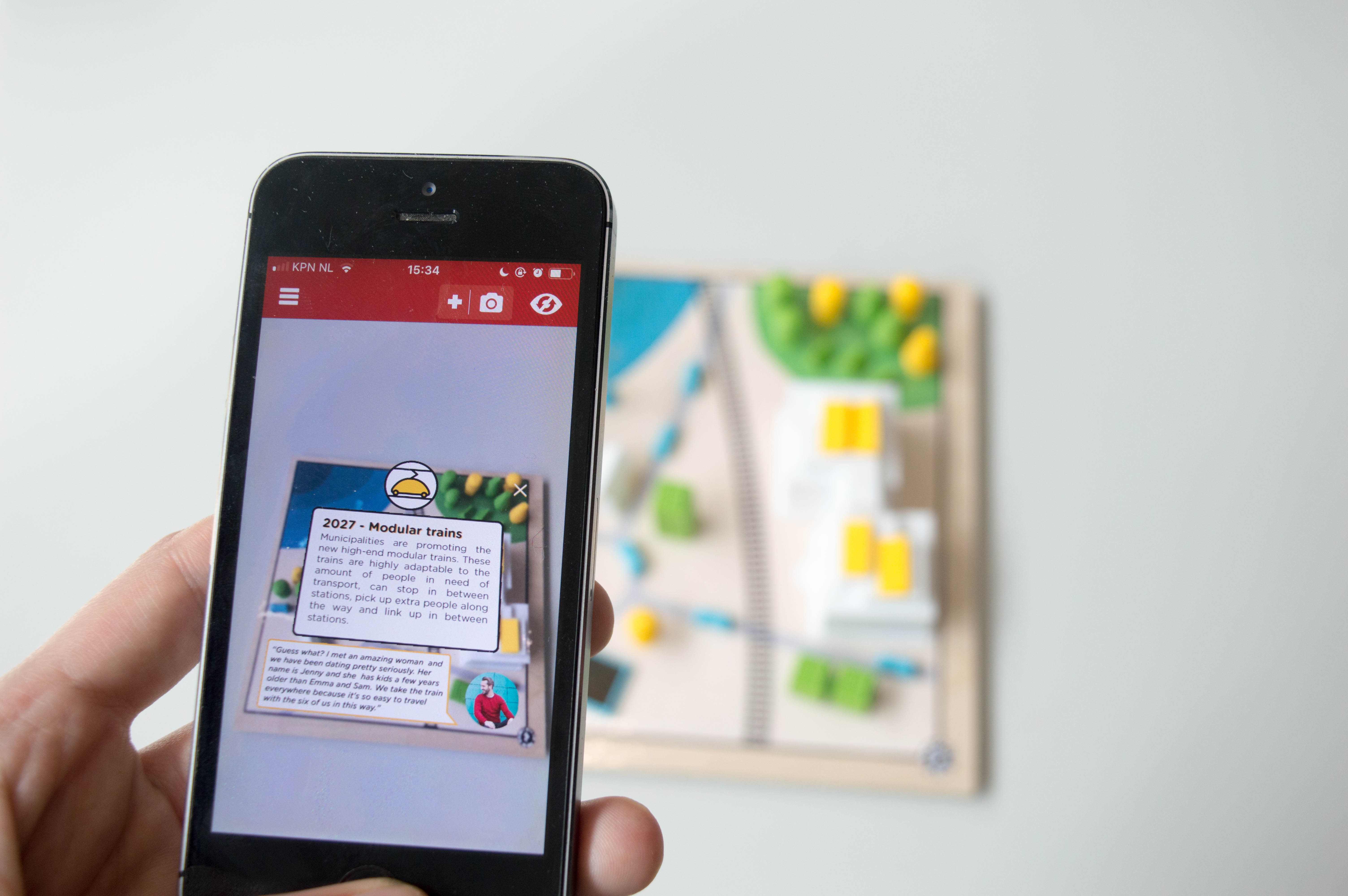 Research shows that while many people are willing to perform sustainable behaviour, much of this good behaviour can quickly wear off as it can be hard to see the impact of the change. People may then be inclined to drop out or quickly go back to old behaviours. To make sure that users of the ECO coin would be more intrinsically motivated, we set up a future scenario to make sustainability more tangible.

Over the past year, we have been experimenting with showing people what kind of future impact they could have when they perform actions with the ECO coin. We did this in two places, at the headquarters of L’Oréal Netherlands and at the TU/e(Eindhoven University of Technology) campus in the department of Industrial Design.Here we crafted the ECO village, a fictional community that grows as participants perform actions incentivised by the ECO coin. Different future  technologies were introduced over time to make users aware of the future scenario.

Travelling by public transport during the week meant that users were rewarded with ECO coins and that the ECO village received autonomous cars or modular trains.Saving energy lead to solar panels and windmills being installed in the ECO village. New technologies were introduced in the ECO village every day as it progressed into the future.

AtL’Oréal, we were invited to make 250 staff members more sustainable. During the one-month implementation of our sustainably currency, the vast majority of their employees fanatically earned ECO coins. Over 4000 actions were performed in total in just 20 days! One big scale model, which showed the neighbourhood around L’Oréal’s office (their ECO village) was present in the canteen and was updated once every week, based on the actions of all the employees together.The employees liked seeing the landscape change and improve, but we soon learned that they found it hard to distinguish the exact impact that their personal actions had.

Next to the model, we also invited the employees to think about what the future of theECO coin might be like by introducing dilemmas about the ECO coin. An example of such a dilemma was whether airline companies should be allowed to join theECO coin network or whether the amount of ECO coins earned for an action should be changed in different locations. These dilemmas sparked several discussions about how the ECO coin might be implemented on a global scale!

After learning a lot from the L’Oréal implementation, we took our ideas back to the drawing board to improve the ECO village experience. We particularly focussed on adding a personal perspective and improving the visibility of individual impact in the scale model. We then carried out a two-week trial with three groups of staff and students at TU/e. Each group of three to four students of staff received their own small-scale model and every member of the group was responsible for one quarter of the landscape.

The elements they received were based on their individual actions, and instead of once every week they received elements daily through a fictional ‘drone delivery’. In this case the users could place their own parts in their landscape. The model could also be scanned in an augmented reality app for extra insight into the technologies and the inhabitants of the future village.

The participants at TU/e said that they very much enjoyed getting this story as a reward for their actions. It even motivated them more than the fact that they could spend their coins in some cases: “Having a kind of possible ethical implications being the reward to me feels nicer as a whole than getting a thing”.They even wanted to use their ECO coins to buy more tiny trees to decorate their landscapes! While they did not like the augmented reality as a medium so much, they liked “the personal scenario because you already get the information and then it’s nice to have a human perspective instead of something very abstract”.

Could we use future fiction to stimulate even more sustainable actions? Can we up-scale the ECO village experience or make it virtual to reach people all around the world? A lot of interesting ideas came from this explorative project. Stay tuned to see what happens next at the ECO coin!

The ECO village will be on display at Dutch Design Week at the Design United exhibition in Het Klokgebouw, as well as the Embassy of Sustainable Design at the Innovation Powerhouse.